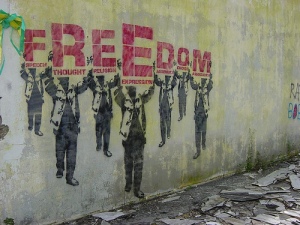 Is it possible, that in the act of reaping so much from the generations gone before, that the very act or even the perceived need for sowing can be forgotten? The freedom generation knows its rights, and can boast in its liberties, but can it gain the moral muscle only attained through self denial for a greater cause? As embittering as the wars of the past were, the generations that endured them gained a social fiber, a resilience, a resolve that even if the dreams of today are never actualized, that at least a future generation, a freedom generation will be able to dream with their eyes open, and see their hopes come to life. Such social fabric is critical to every generation, not for the generation itself, but for the one that follows. Perhaps while the freedom generation revels in its freedom, time and money should be invested in ideals that will far outlive the current generation, in dreams we may never directly benefit from, that one day after us, there will be yet another freedom generation.

Writing is the lens through which life makes sense. I write what I see and I write in order to see.
Loading Comments...
%d bloggers like this: